Texas History Video: The Oldest Fort West of the Mississippi 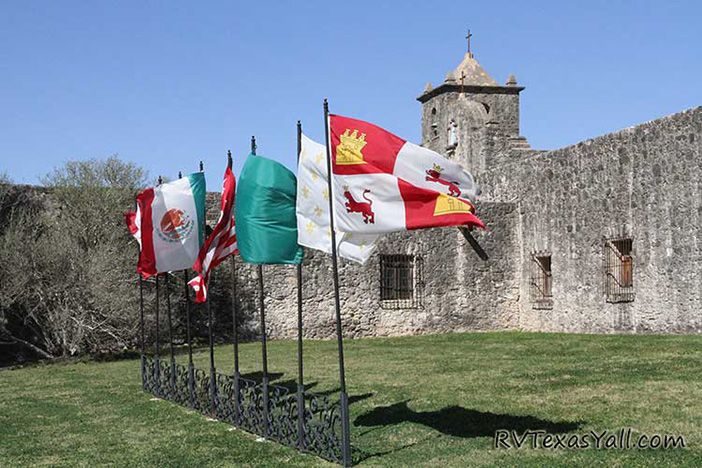 Just a short hike or bike ride away from Goliad State Park and Historic Site, along a marked trail, you will find another Texas historical gem:  Presidio La Bahia, a Spanish fort established here in 1749 with Mission Espiritu Santo (which is at Goliad State Park) to prevent the encroachment of the Native Americans and French (and later the English and Americans).  Today, it is the oldest fort standing West of the Mississippi River.

Even though Presidio La Bahia is an inland fort, it became responsible for the defense of all of Spain's coastal and eastern provinces in what would later become Texas after other presidios in the area were abandoned. This presidio and its missions are the ONLY surviving example of a Spanish Colonial mission/presidio complex in Texas. Here is a brief history:

La Bahia is one of the only communities West of the Mississippi River to participate in the American Revolution. From 1779 to 1782, soldiers from this fort escorted large herds of cattle from Presidio La Bahia to Spanish Colonel Bernardo de Galvez as he and his men fought against the British. Under Spanish rule, Galvez was the Governor of Louisiana and he had a reputation of supporting American Patriots during the Revolutionary War. Incidentally, Galveston Bay is named for Colonel Galvez.

Presidio La Bahia is also home of the longest siege in Texas military history in 1812-1813. During the Gutierrez-Magee Occupation, 300 men claimed the fort under the green flag of the First Republic of Texas (that's more than two decades before Texas finally did gain independence). Spain reclaimed the fort after their victory at the Battle of Medina.

The Mexican flag began flying over the presidio in 1821 when Mexico won its independence from Spain. But for 3 days in that same year, the red and white flag of the Second Republic of Texas was raised here while the James Long Expedition briefly took control of the fort. 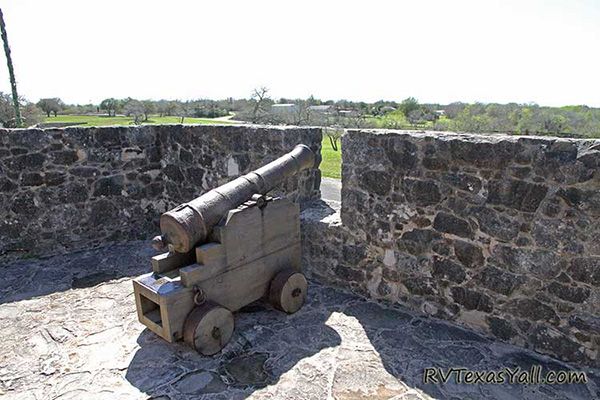 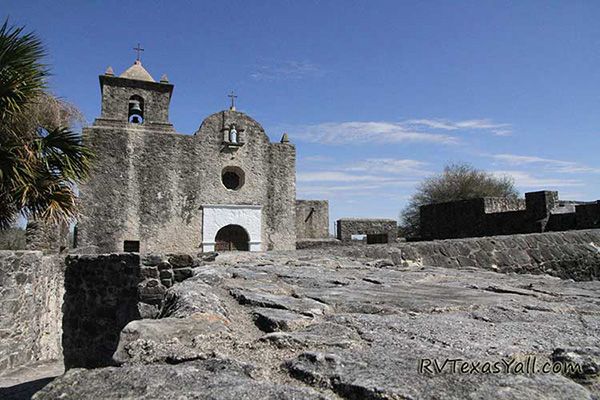 Our Lady of Loreto Chapel

The presidio community was basically a closed community. Single men lived within barracks inside the walls, while married soldiers lived with their families in small huts just outside the walls. For the most part, children remained within the presidio community throughout their lives. Boys became soldiers; girls married soldiers and became teachers and medical caregivers within the community. Ignacio Zaragoza is a good example. He was born here at Presidio La Bahia and grew to become a military hero in Mexico.

As generations passed, more outside folks chose to build their homes near the presidio walls for protection. The community of La Bahia grew and presidio families began to interact with the outsiders who had become locals. They began to marry into non-military families and trade food and resources. In 1829, the community of La Bahia changed its name to Goliad to honor Father Miguel Hidalgo (the letters in "Hidalgo" are re-arranged and the H is removed since it is not pronounced). Father Hidalgo rose to fame for his work in trying to obtain Mexico's independence from Spain. The population of Goliad grew to make it the second largest Spanish settlement in Texas. But the growth of the community next to the presidio led to problems. The roofs of the many houses began to block the soldiers' field of fire from the fort. So ironically, though the population was growing due to a want of protection, that very growth made protection immensely more difficult.

This development combined with Mexico's distraction of building a new nation, meant that Presidio La Bahia was unprepared to successfully defend itself as the Texas Revolution began. The presidio was caputured by the Texians on October 9, 1835, and the Bloody Arm Flag (which has become recognized as the Goliad flag) was hoisted above Presidio La Bahia on December 20, 1835 upon the signing of the First Declaration of Independence of Texas. This declaration was signed by 92 citizens and soldiers on the alter of Our Lady of Loreto Chapel inside the presidio.

Our Lady of Loreto Chapel is the oldest building in the fort. It served as the religious center for the soldiers and their families. The chapel is one of the oldest churches in the United States and church services have been regularly held here since 1779. The statue of Our Lady of Loreto which stands over the entrance to the chapel was created by artist Lincoln Borglum, who along with his father Gutzon Borglum, carved Mount Rushmore! You can still attend mass here every Sunday at 5pm. 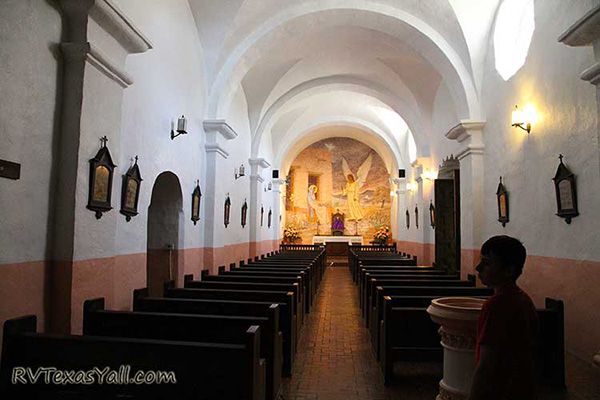 Inside Our Lady of Loreto Chapel 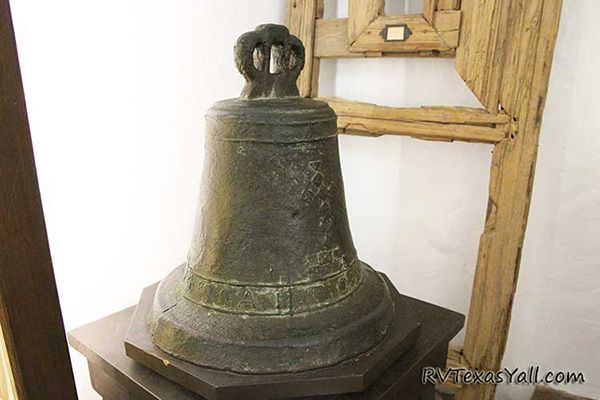 In February 1836 Colonel James Walker Fannin assumed command of the Texian Army here at Goliad. Just a few days later, the siege of the Alamo began in what is now San Antonio.

Following the fall of the Alamo, Colonel Fannin received orders from General Sam Houston to retreat from Goliad to Victoria. Several days later, loaded with equipment and heavy artillery, Fannin and his men began a slow evacuation of Presidio La Bahia. They were met at Coleto Creek by Mexican forces led by General Jose de Urrea.

After two days of battle, Fannin and his leaders signed documents of surrender. Historical accounts indicate that the Texian soldiers believed that they were to be held as prisoners of war and eventually released to return to the United States. But the surrender documents actually stated that General Santa Anna would determine their fate. 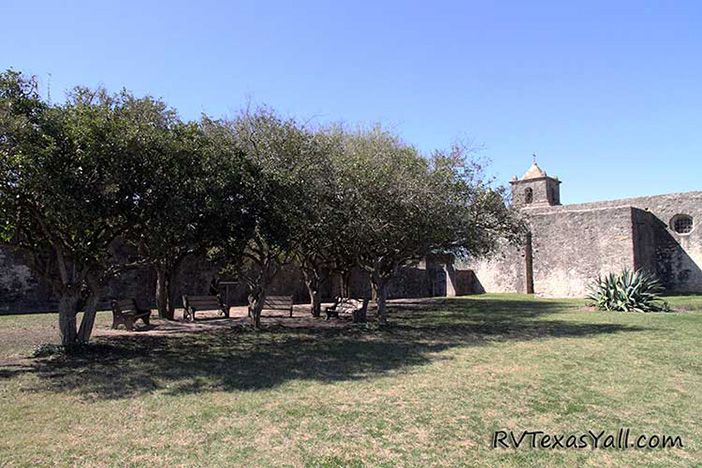 Over the course of several days, the Texians were returned to Presidio La Bahia to be held in the Chapel. General Urrea wrote to Santa Anna recommending clemency for the prisoners, but his request was denied.

On March 27, 1836 here at Presidio La Bahia, Colonel Fannin and his approximately 400 men were shot and killed in what would become known as The Goliad Massacre. Their bodies were stripped, rolled into a ditch and burned. Roughly a month later on April 21, 1836, General Sam Houston's army defeated General Santa Anna at the Battle of San Jacinto marking the true beginning of Texas Independence from Mexico. Some historians believe that the lack of mercy shown at Presidio La Bahia served as extra motivation for the Texians at San Jacinto.

After the victory at San Jacinto, a group of Texians led by General Thomas Rusk came to Presidio La Bahia to gather the remains of Fannin and his men. The fallen soldiers were carried in procession to a burial site behind the fort and given a proper military funeral on June 3, 1836. One hundred years later in 1938, the Fannin Memorial Monument was erected over the gravesite. It lists the names of every man known to have been killed in the Goliad Massacre at Presidio La Bahia. 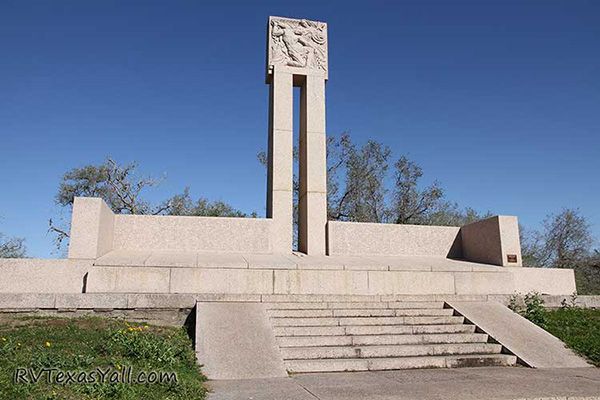 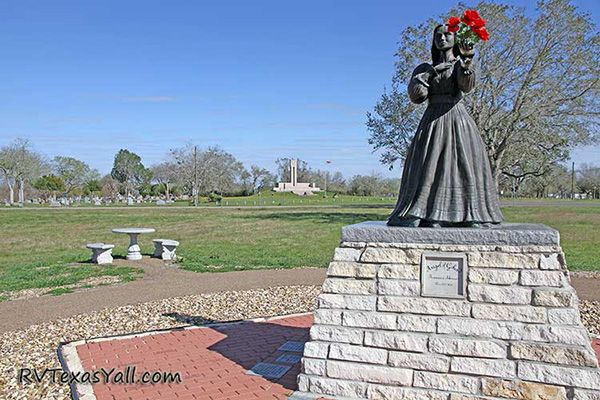 The Angel of Goliad

Between the presidio and the Fannin Memorial, you'll find a statue of Señora Francita Alavez. Señora Alavez was married to a captain in the Mexican Army who was at Presidio La Bahia while Fannin and his men were being held. When she learned that orders had been given to execute the Texians, she hid as many of them as she could and pled for clemency of others. Señora Alavez is credited with saving the lives of 25 men here at Presidio La Bahia. She is remembered as "The Angel of Goliad".

You will find Presidio La Bahia just one-quarter mile from Goliad State Park and Historic Site and less than one mile from the city limits of Goliad, Texas. While you are here, be sure to check out the fort's museum and historical movie. Just outside the walls of the presidio, you'll find the birthplace of General Ignacio Zaragoza, the Fannin Memorial, and the Angel of Goliad statue.

Definitely, put Presidio La Bahia on your list of places to visit in Texas! 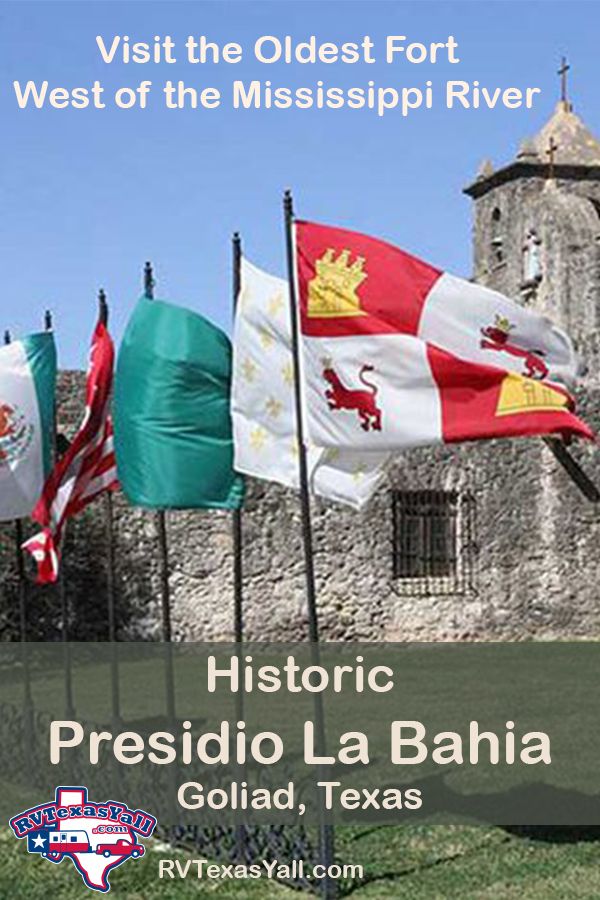 From the Ice Age to the Space Age: 100 Historical Sites to Visit in Texas

Our Write-Ups on Other Historical Sites in Texas

The Story of Jane Long: "The Mother of Texas"

Also in the Goliad Area:

The Birthplace of Ignacio Zaragoza: The "Hero of Cinco de Mayo" 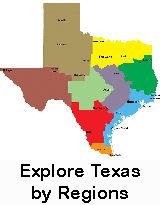